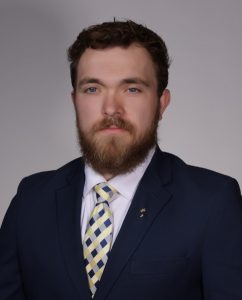 Kelton is originally from Tennessee where he grew up on a 100 cow/calf operation. His family moved from the Volunteer State in 2008, to where they currently reside, in Roberts, Wisconsin. Currently, his family operates a Maine Anjou focused show cattle operation where they sell cattle to potential 4-Hers, FFA members, and other show people alike. He joined DTS in the spring of 2020. Kelton said he joined the brotherhood for the positive, energetic atmosphere that he felt almost instantly when he entered the house. Kelton is currently a sophomore, studying animal science, with a beef production emphasis. After college Kelton plans to enlist in the United States Navy where he plans to attend BUD/s and become a Navy Seal. After that, he plans to start his own line of Red Maine Anjou show cattle.